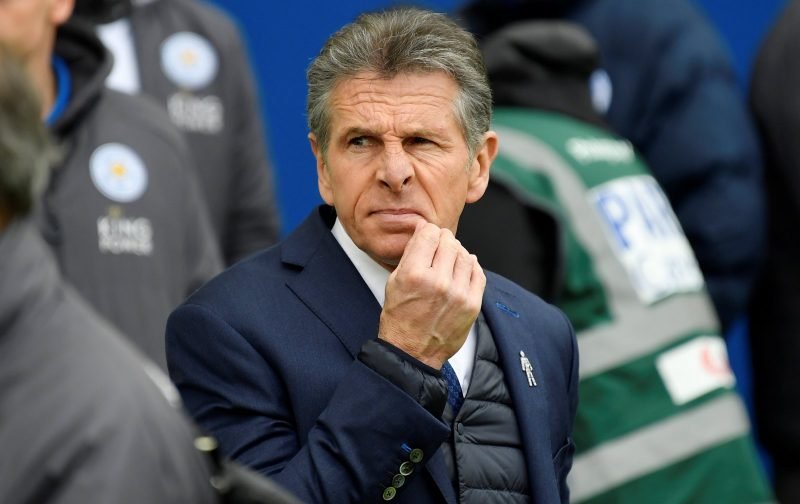 Leicester City manager Claude Puel has called for some perspective on his job this week given the sides faltering form as the season comes to a close.

With only 12 wins from his 33 games at Leicester, his change in style from the quick, attractive counterattacking side we were under Claudio Ranieri (to particular success) has been replaced with a more European slow build up and few would even call it tippy tappy in philosophy.

With his position reportedly under pressure, Claude Puel has called for Leicester fans to have some perspective: https://t.co/3YknwhWuss pic.twitter.com/lhdVWRdPzE

What it has done has blunted the majority of our players and their natural instincts and if it hadn’t have been for a rich-in-form Jamie Vardy, despite his dearth of chances, things would be considerably antsier amongst the fan base as our England man has been largely carrying us on his back.

With pressure clearly growing on the Frenchman as we continue on our run of only four wins in the last 19 Premier League games, he has received the vote of confidence from our owners but many fans are well past that.

An interview with Sky Sports this week showed he has confidence in his ability and he was honest enough to admit he could be the next casualty in the top flight, but he stated he wasn’t worried about that and threw his defence behind a manager needs to be given time to stamp their mark on the side.

His words made a lot of sense, but for many fans, a manager’s job is to make the best of the group available first and foremost and not impose their style until they can shape the team in that manner. He gains little goodwill from doing it backwards.

“The Premier League is like a piranha club but the most important thing for me is to build for the future. It is not possible in six months to have all the possibility to perform like a great team. We have to work together with patience and we can build something strong for the future. I am pragmatic about this. I finished eighth in the table with Southampton and we can see where they play now.”

He also went on to say that having come into the club ‘in difficulties’ he wanted perspective from fans despite the poor run of form, as he’s seen improvements and we will finish in the top half of the table which should be considered success this year, allowing him to build on that next season.

Whether right or wrong in the modern game, he also cited unrealistic ambitions and expectations, saying ‘seventh or eighth’ is the reality fans must accept. So for him, there isn’t any pressure to change his philosophy as he presumably works to make the future what the fans wish the present to be. His focus is improving performances and developing young players because that is his ‘job’.

He added that a ‘good collective and consistency’ only comes with stability and he pointed to Leicester in our title win year and the success Southampton had a few years ago.

Leicester fans largely responded to this as you would now expect, they don’t see improvement and they fail to see why we’ve gone so far backwards in such a short period of time when our core strengths remain obvious to all.

The unexpected comments came from Southampton and other fans and there’s plenty more on other feeds.

Amazing this is the strongest squad that @LCFC have ever had, Puel has systematically taken it to pieces & destroyed the ethos our team. We pay hard earned money to support our beloved team & we have seen the most dreadful football dropping many points to lower opposition. GO NOW

Same as at #saintsfc. He served up some horrifically dull football, he’s clearly better suited to one of the European leagues rather than the premier league

Each will argue their own case, Southampton would say Mauricio Pellegrino replicated Puel’s more defensive style of play that held them back, Everton fans might even acknowledge the job Sam Allardyce has done defensively for them. But the crux is fans want to be entertained. Fans accept some matches will be rearguard actions, or dirty and ugly affairs but full of passion and desire. You accept those games in a season – you expect the opposite at other points though.

I’d imagine fans of all three clubs referenced will be having similar chats over the summer, suffice to say Mark Hughes seems to be winning Saints fans over as they seem to have erred to a more attacking outlook in recent times.

That’s what Leicester fans are craving once again.